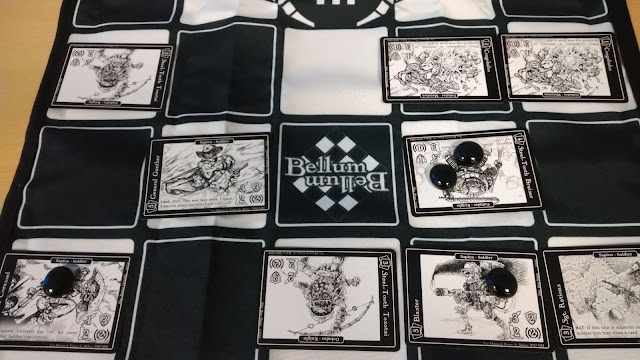 In an age of gaming where some games not only rely on one, but multiple rule books, all with fiddly explanations and play through examples, it's always refreshing to see a game that shouts and claims complexity, and at the same time condenses it into a ten page rule book that fits comfortably into the palm of our hand. This is what people like me like to see when they have been asked to write a few lines on our first thoughts of a game. That the first barrier to entry is potentially a very small one, which means getting to the table doesn't involve a huge amount of careful planning. 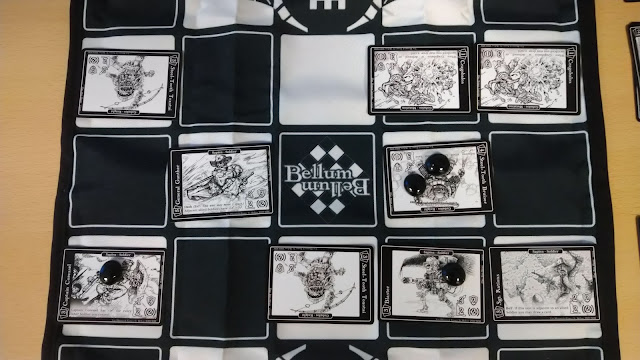 Which takes us to Bellum of Mutants and Men, where the Sapient Kingdom face off against the Gobalos in a naming convention I can only guess is to avoid some kind of potential copyright claim against Van Hammock Games. A monochromatic tale of protecting your keep from the opposing forces, where resources are quite literally your hand of cards and you play out the tale on a cloth board which saw what chess was wearing for it's night out on Instagram, and quite literally copied the same look, but maybe not using the same expensive fashion designer. 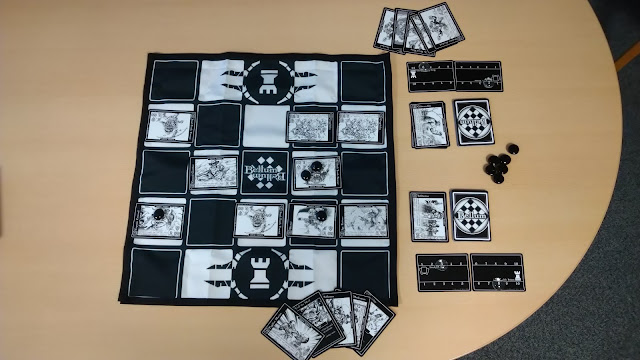 Bellum does well in trying to limit the amount of moving parts it uses in the game. As an example, the number of cards in your hand dictates the 'stockpile' or resource that you have to spend in your turn on cards. The information for what unit is displayed succinctly on each card, with numbers relating to Attack, Defence, Actions and Range. Some of the cards will have actions that you use when you activate the cards themselves. Fights happen in a simultaneous manner, providing the units are next to each other, but not diagonally, and unlike some games, a unit that is attacked twice will not regain defence between attacks, so you can whittle down units if required, and if you attack at range, the defending unit has no way of returning fire. You also have the option of playing Tactic and Blitz cards, which can turn the tide in either your own turn or your opponents turn and are played as action cards when required. 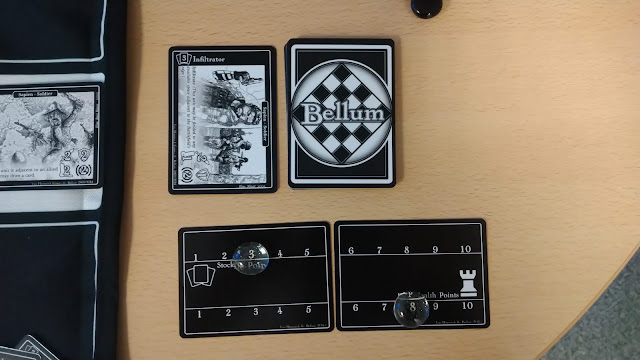 You're only looking at a five by five grid here, so the action can hot up fairly quickly, with multiple exchanges between units happening in a turn, especially if you are fielding those with generous action points and with your keep only having ten life points, mistakes can be costly and everything can come crashing down unless you are careful. Bellum is designed to be played and learned in short bursts, and even after you feel you are totally confident with the base deck included in the core game, you can break out the expansions included within the box in order to try your own attempts at building a winning deck which adds a large amount of longevity to the game. 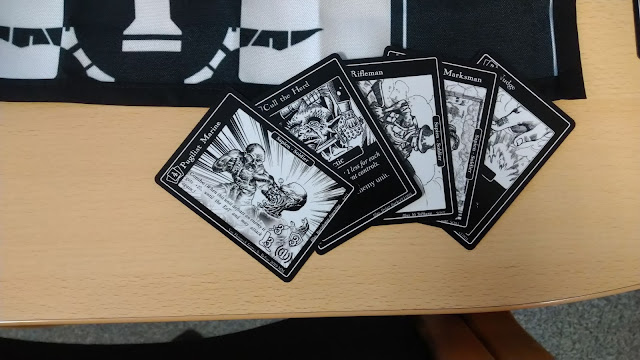 There's not a lot to talk about here, because Bellum isn't trying to be overly complicated or over fussy, you'll play your cards, you'll attack your opponent and try to kill their keep, You'll manage resources, and then you'll replay it and and again, because it hasn't taken 3 hours to learning the f**king thing.

I would wish for a few things. While the monochrome is striking and glorious and will have people stopping and asking what you are playing. I'm not a fan of the art, compared to the rest of the graphic design, as it's not as strong and striking as I think it could have been. I want characters to be in my face, and I feel you end up concentrating on the numbers and when the cards are out, it's difficult to tell who is who on the field at a simple glance, apart from their orientation.
Also, the rule book text is white text on a black background, so be prepared to read them in a well written room. I understand the need to stick with the theme, but I can't play your game if I can't read the rules. 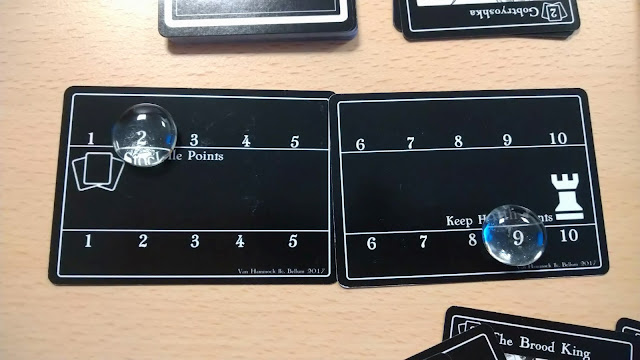 You also need to get a few games under your belt before you learn to hold back on the stockpile, and keep the cards for later rounds and maybe not charge in to take the keep with reckless abandon.
Give it some time and some games and you'll warm to the purity of what Bellum is trying to bring to the table.  It's not going to take all night to play or learn, and to a lot of people, that's going to be enough for them to consider giving Bellum a serious consideration in adding to their collection or at least checking out the kickstarter campaign.
Also if you don't like any bright colours in your games at all.

We were provided a copy of the game for preview purposes.