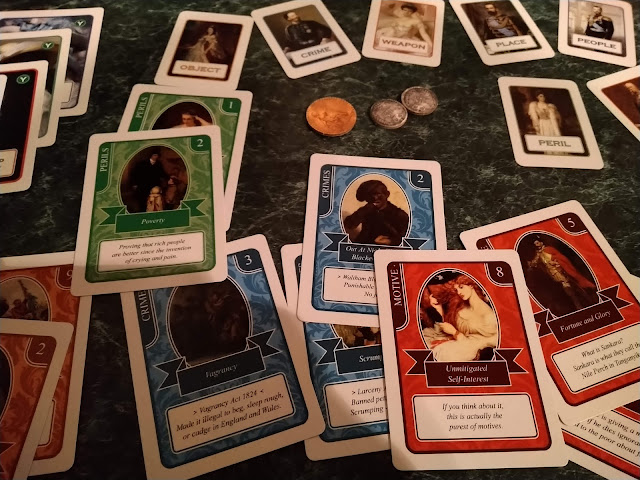 'Aye! I said scuffling my way through what must have the best part of at least forty men, all armed with rapiers and skilled in the art of shuffling people off their mortal coil..'

'Ah, I think you'll find it was a group of urchins that were only armed with germs and the foulest of language'

'I think you'll find Madam, that there were at least twenty of them!!'

'I think you know that actually, you were chased down the street crying by an angry seamstress wielding a loaf of bread. You cried sir, and then ran into a lamp post.'

And this is pretty much how The Old Hellfire Club plays, a collection of tales and stretches of the truth, more akin to messages on the sides of buses, but this time you can call people on their fabrications and steal their drinking gin pennies while having a jolly good time while the nonsense progresses. 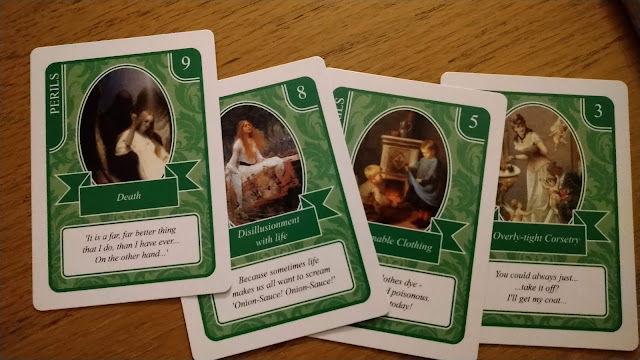 For those who are concerned about their ability to tell a tale as old time, do not fret nor worry, as Old Hellfire games has at its foundations a pretty strong and simple card game that keeps the ideas and the conversation flowing through some absolutely gorgeous looking cards. I'm a huge fan of classic art and especially portrait work, and I would say it's actually worthwhile going through the deck and appreciating the cornucopia of ye olde oil paintings that you'll see in your hand as you play. 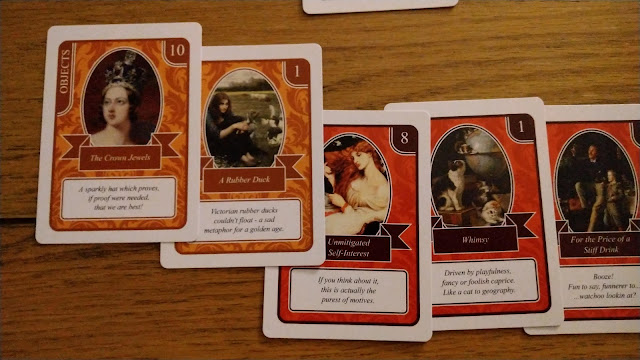 The mechanics behind the game are relatively simple here. Depending on the number of players, ideally more 2, you'll be dealt a number of Boast cards that on them will contain one of a series of suits including Person, Object, Peril, Insult or Motive plus a few others. Each of these Boast cards has a numerical value on them from one to ten, where the higher value being the more magnificent choices, where those with the values of one and two, will relate to the more lowly and pathetic story ingredients.
As you recount your tale, you'll play cards to support your perambulations and then continue on, unless one of the other players decides to 'head you off at the pass' and play a card of the same suit and lower value. At that point the round will stop, unless yourself or others play a lower value card and continue the race to the bottom, at which point the player who has played the lowest card will win that round of repartee. If you aren't challenged, you have the option to stop your story and pocket all of the boast cards you've played that round and they will go towards your final score. If you play the highest card of a particular suit, then the Benefactor card for that suit will be yours, and will be worth more gin pennies at the end of the game. 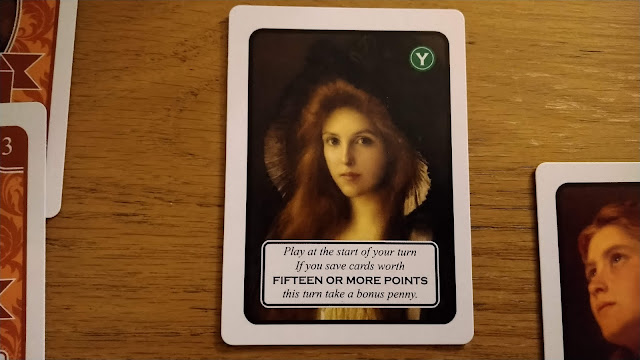 Patron cards bring in additional effects that can be played at the beginning of a round or even to counteract Boast cards that other players have played through the round, thus stopping them in their tracks. The idea being that even if you don't have a card that can interrupt play in terms of lower suits you can still jump in with your own particular spanner in the works. 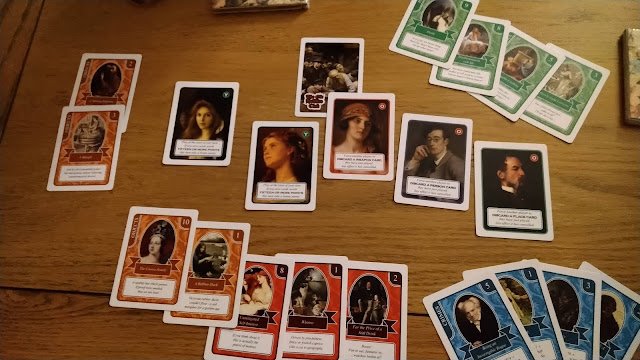 The Old Hellfire Club has a tricky tightrope balancing act that it needs to maintain, as like any game where role-playing is the key element, the game is going to win or lose based on the vigour and splendour of the participants. Where the game wins is that most of those jovial elements that are required to keep the story going are there for you on the cards, and for the most part, even the most shy story tellers will be able to take the game at it's mechanical value, and still use skill in order to win those valuable pennies for gin.

For those who want to go full force ham, this is a framework with purpose that allows all the pantomime fun of the fair, and tied in with the simply wonderful artwork, maybe this is one club where you want to consider full membership regardless of whether or not they would want you as a member.

Old Hellfire Games provided us with a prototype of the game for this First thoughts piece. You can back the kickstarter campaign on https://www.kickstarter.com/projects/oldhellfireclub/the-old-hellfire-club