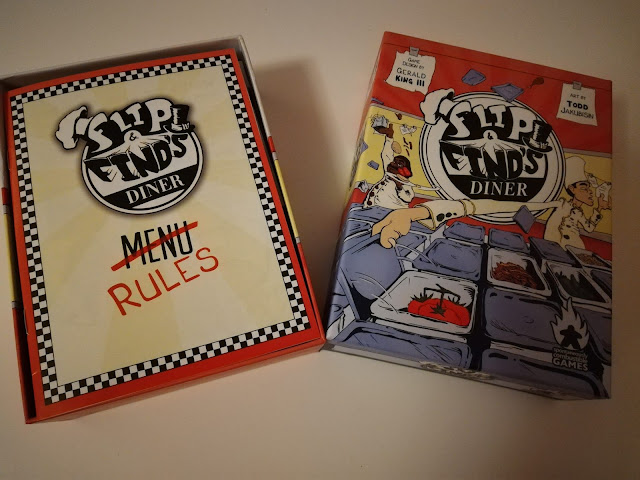 Flip & Find's Diner takes a game anyone with children will know - tile matching - and puts a little extra ingredient into the mix. Does this elevate it beyond that basic premise of finding matching tiles though and is it worth a mention in the crowded world of board games? Read on to find out.

I first heard about Flip & Find's Diner on none other than We're Not Wizards back in March 2018. Gerald King III of Spontaneously Combustible Games was a guest talking about the forthcoming Kickstarter campaign for the game and I was impressed enough to back the campaign. The game duly arrived around the turn of the year and here are my thoughts.

As I said previously, at it's heart this is a tile matching game. 25 ingredient tiles are laid out face down in a 5 x 5 grid. Then the extra element comes in. 5 order cards are laid out at the bottom of the tile grid, face up. Alongside this a tip deck is placed face down. 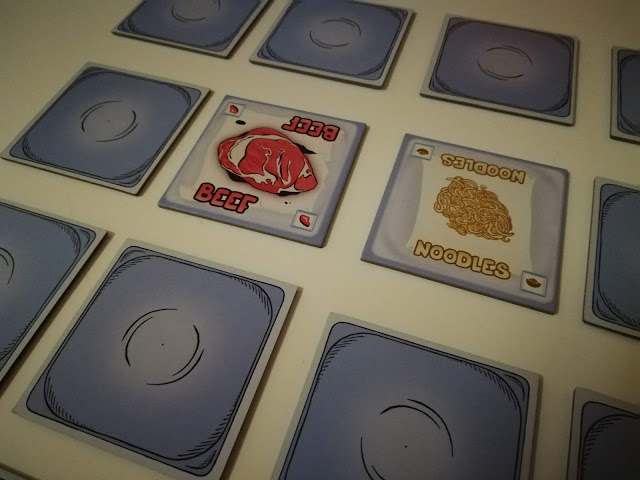 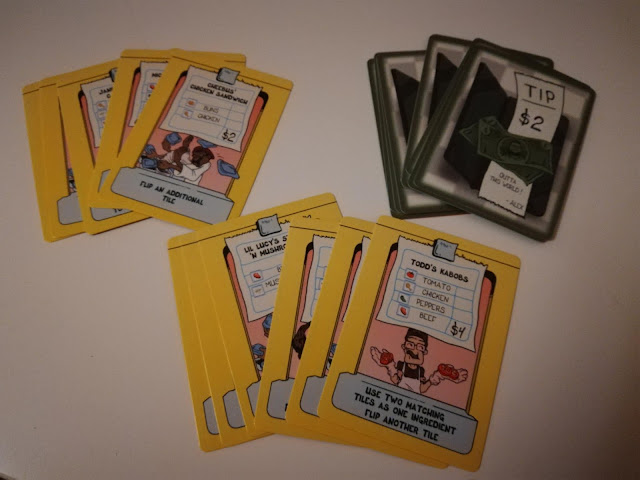 Once order cards are claimed, they can be played in later turns, using their bonus effect. This could be revealing an additional ingredient on a future turn, using a bonus effect previously used by any player during the game or maybe taking a sneak peak at a tile and then returning it face down. The bonus effects add another dimension and a tactical element to the game that's not present in a straight up tile matching game.

The game ends when a player fulfils 5 orders. At this point end game scoring begins. Order cards have a dollar value depending on the number of ingredients. These are added up and any tip cards the player has received are also added to the total and the player with the highest total wins.

Flip & Find's Diner is a great family game. I've played quite a few 2 player games with my 8 year old daughter (she beat me several times and has the highest score to date in the house). We also had a 4 player game with my daughter, son (13) and wife. The game was a definite hit. The easy to learn gameplay, the colourful, cartoon art style by Todd Jakubisin and the easy set up and speed of games make it a very easy sell to the family when we get together for games. It's now alongside Kingdomino and Sushi Go! as the staples of family game night. If you have children I'd say this is a must play game for the reasons I mentioned. If you're shelves have heavy Euro games and Gloomhaven and there are no kids in the house then it may be a little light for your tastes. The game also offers a solo variant but at the time of writing I haven't yet tried this.

This is my personal copy of the game, received as a backer of the Kickstarter campaign.