Dan Hughes First Impressions (Without Unboxing) (NOT A REVIEW) 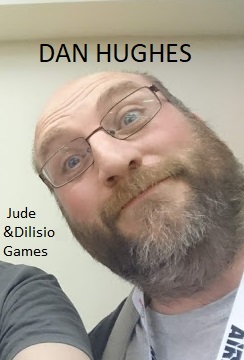 In what can be said as a strange direction in the industry, I was recently sent a review copy of the latest version of Dan Hughes by Jude & Dilisio Games LLC which as you know has been on release for some time. Well I would probably say escaped rather than released, I wouldn't say sent, it was kind of a case of the local courier dropping a rather Hughish box outside the office where I work, ran the doorbell and dashed off in his van, laughing heartily, with a very familiar acting voice indeed.
In these situations, I normally have to answer joking questions from my boss, like 'What have you got delivered now for goodness sake?'
'Is this another wizard outfit'
'How come I'm obviously paying you too much money?'
In this case the boss had nothing to say, and truth be told it was almost embarrassing to have such a large parcel in the office. Not as embarrassing as trying to get the box tied to the car, driving 20 miles per hour down the motorway to get home again. At least I can count my blessings that Dan Hughes wasn't left in the shed, or even worse, the recycling bin, seeing as it was bin day, and I'd hate to loose yet another cardboard wonder to those scavengers.

I did film an unboxing video but for some reason it was taken down from YouTube almost instantly. I'm actually lucky they are interested in hearing my appeal to be perfectly honest. However, that remains a story for another time, when we've both had a drink. Or a bottle, or two. Definitely. Like, I need a drink thinking about it.

First things first though, the box art is spectacular, Ian O'Toole has excelled himself with a cracking, almost life like design throughout the entire game. I'm not sure I've really come across components so uncannily real. Well in truth there is actually only one component.  It's a pretty fuzzy component. But it's still totally uncanny valley here. Actually. I'm wrong. It's done completely by Mike Poole.. ah. Now that does make more sense.

There's a reasonable amount to like here, the box is sturdy and due to some kind of electronic wizardry, or maybe magic, (not that I would know anything about magic) every time you open the box you are greeted by a firm and warm HELLO!!. Like every time. Every.. single..time.. without fail. EVERY TIME...
It's not like it was designed like this, but I'm not sure. You'll be quick to think this game is broken, but you'd be wrong, its a bit more sporadic than that.

And that is maybe one of the most interesting things about Dan Hughes when you actually get it to the table, in what can only be described as a legacy type, deck building, ideas tableaux of a game, you're never really sure what you're going to get. I believe the kids version of the game has recently gone out of print due to some technical issues with distribution, but it's good to see this version still works well without need for the previous version but you can still play this version provided there maybe isn't another version as there could be  potential issue with future versions and now other versions might be available.
Current market value suggests that the version with the Noble Order of Huddersfield Board Gamers sleeve is the most sought after, and apparently one version even has a mustard misprint on the cover, but that's never been substantiated.

For those interested in possibly expanding the experience they'll have with Dan Hughes,you can consider the Lee and Dan Expansion, which in all honesty plays like a proper experience as opposed to a traditional tabletop game, and many people who own that expansion have definitely claimed that its an 'experience'.
Many however have flocked to the 'Arch Nemesis Expansion' which surprisingly is only currently available in the US much to the frustration of the rest of the known world.
As with all popular games, unfortunately there are some counterfeit copies on the market, and so beware when you are considering a purchase. Some have even gone as far as producing fake expansions in order to cash in on the current trend.

So be warned and make sure you check in advance, as you can't guarantee the same quality, or maybe you could, but who knows nowadays really.
Currently there are whispers of awards in connection with the game on Board Game Geek itself for Dan Hughes due to previous involvement in other games, as well as this current version, but these won't be announced until later in the year. If rumours however are true that the 'Arch Nemesis' expansion maybe available at some point in the UK in the future, I'll frankly flip my shit.

Dan Hughes is an interesting take on the tabletop genre as a whole, and certainly worthwhile considering providing you have the space, though if you are undecided, then please check out the links below for more information and a sample.

The review copy was provided to us by Jude & Dilisio Games and they paid us a ridiculous amount of money because we are welcome shills.

Dan Hughes Lee and Dan Letters From Huddersfield Sporadically Board