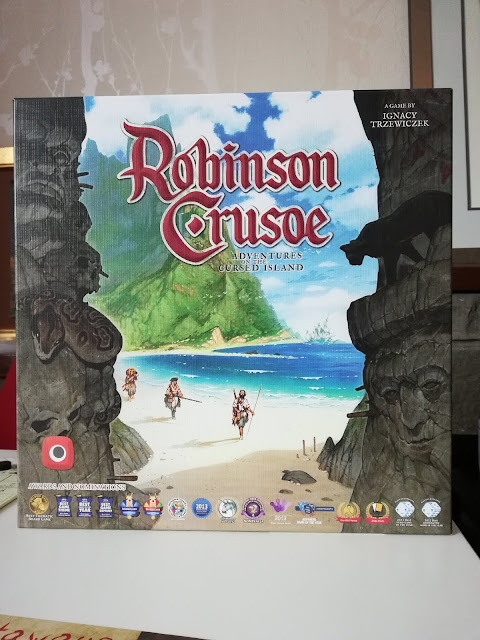 Robinson Crusoe: Adventures on the Cursed Island places players on a deserted island, shipwrecked there and in dire need of food and shelter. Here I'll talk about Solo mode using the beginner scenario Castaway, which is a great introduction to the game.

The game is played over 12 rounds, with the aim being to build a log pile and light a fire to signal a passing ship. The ship is scheduled to pass on rounds 10, 11 and 12 so time is of the essence. To further complicate matters, the woodpile must be added to only once per turn, prior to the Action phase, adding another level of complexity and difficulty. This isn't even taking into account the day to day task of actually surviving, which can be very challenging. 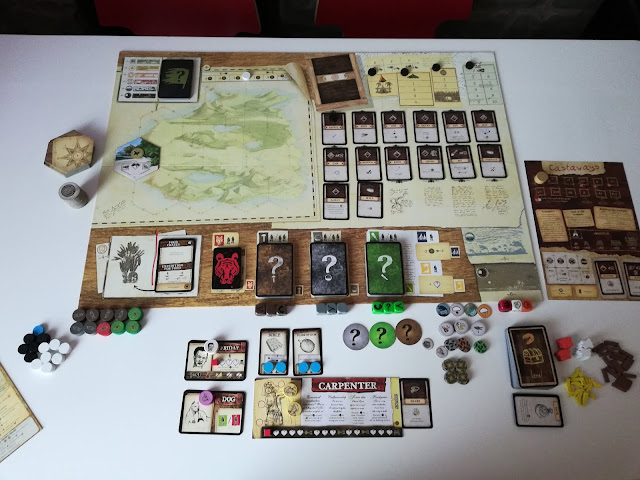 Each round is comprised of 6 phases. The Event (skipped in round 1), Morale, Production, Action, Weather and Night phases. The Action phase is, unsurprisingly, where most of the key decisions are made. Do you explore your new home and seek out resources? Do you try and build rudimentary tools to aid your plight? Do you go hunting the local wildlife? Should you gather wood and maybe fish? These decisions are not easy and will have a huge impact on your game.

Another facet to these decisions is how many people you commit to these tasks. Committing two pawns guarantees success, but assigning one pawn leaves you open to nasty card effects, wounds and failure. Each character comes with two pawns, while in Solo play you also get companions in the form of a dog and Friday. Friday acts as an additional pawn you can assign anywhere, while the dog can only explore or hunt, which is very thematic. Friday can also be wounded and die, which adds another level of complexity when assigning actions.

As much as the need to gather resources and create items to assist in your survival and to attain the scenario goal, you also need shelter. Its essential you construct a camp as soon as possible. You can then increase the roof and palisade levels to protect you from the weather, which in the first scenario will gradually worsen from round 4 onward. Trust me, the weather can be brutal in this game. Snow and rain will destroy resources and physically harm your character so again, a balance must be found with protecting yourself and working towards your goal of escaping the island. I had a round in my last game where the heavens opened on me and I suffered lots of wounds due to insufficient shelter, almost killing my character. 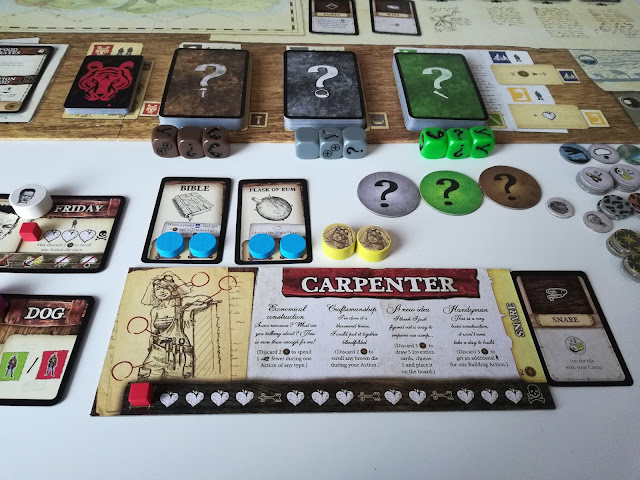 The game also has several decks of cards, the majority of which will cause you no end of problems and throw bad weather, wild animals, disease, injury and general misfortune your way that will severely test your survival skills. Event cards which get drawn at the beginning if each round are dual effect cards. The top half is resolved when its drawn, then the mechanism to cycle these cards out of play can trigger the effect at the bottom of the card, which is generally not a good thing. You can take wounds, lose inventions and lose Determination tokens (which are like an in-game currency). These cards can be mitigated by committing the required resources e.g. 1 pawn and 1 wood, to discard the card before the nasty effect is triggered.

There are also icons on the Event cards which trigger an effect listed on the scenario sheet. In Castaways the book icon is ignored but the question mark results in the relevant coloured token being placed on the appropriate action deck. The next time that action is undertaken the top card is drawn and resolved, with the token discarded. These cards represent adventures the players have while carrying out the action. Sometimes they are good, but mostly they are bad. Each character also draws two random items which have limited uses but provide benefits. They also have their own personal invention, which once constructed can glean determination tokens. The game also has various tokens which are triggered from card effects or exploring tiles and can provide food, medicine, weapons and morale amongst other things.

Another key phase is the Night phase, which is the final phase of the round. Here you must eat, or suffer wounds. Sounds easy, but the game will cause you to lose food, close off food sources on the map stifling production – you get the idea. It should be noted that there are two types of food, perishable and non-perishable. During the night phase any excess perishable food is discarded. (Fear not though, you can create storage which makes all food non-perishable should you wish). The game wants to kick your butt and does it well. You can also move camp to an adjacent tile which can be useful. You'll also suffer damage if you have not constructed a shelter, and your camp does not currently occupy a tile with natural shelter.

The game is pretty tough, even in the introductory Castaways scenario. I have managed to succeed but its been a close run thing. In my last game, my loyal companion Friday actually died and I was caught in a storm that almost killed me before I lit my fire and escaped. Every round throws up a lot of decision points in what strategy to adopt. Do you explore a lot early or do you build tools early to help achieve your goals. There's good replayability here from the amount of cards available versus the amount used in the first scenario. The game comes with 74 Event cards, of which only 12 are used in Castaways. There are 9 base invention cards that remain constant each game, but there are 5 randomised from a total deck of 30 cards. There are treasures, traps and 90 adventure cards split across the 3 main actions of build, explore or gather. There's also a deck of 16 beasts that you can hunt. There is a lot of variety here.

I want to mention components here as well. There are a lot, but between the beautifully designed board and cards there are all manner of dice, tokens and pawns that are used in the game making it a great, tactile experience. Not sure about you but I like a game with lots of components that are moved around the board and different tracks that are used to measure various game states. The game also comes with 4 characters to choose from and its a welcome touch that these each have male and female options. The rule book is also fantastic. From a design standpoint it's lovely to look at but more importantly its very easy to read and follow making the game fairly straightforward to pick up and learn. Special mention to Paul Grogan at Gaming Rules! who edited the rule book. It's beautifully laid out and really easy to follow, which is by no means a given in board games. 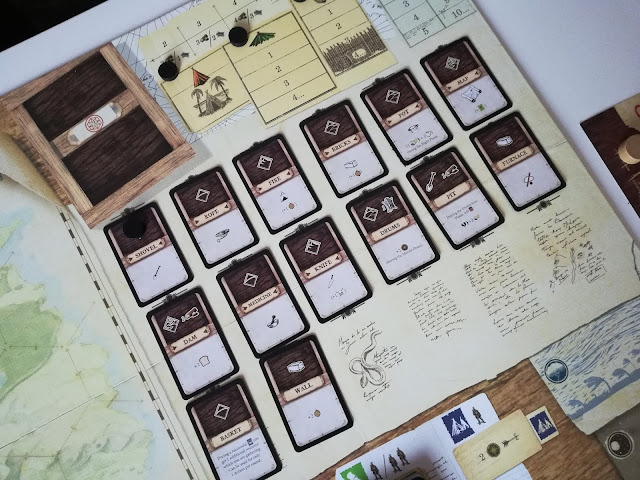 In summary you should just buy this game. Its fantastic. You really get invested in ensuring the survival of your character and companions. The decision making in the game is a tense affair once you realise you are in constant danger from accidents, local wildlife and the weather and time is running out to escape. There are a further 6 scenarios in the box, each with a different theme and goal, with an expansion planned for Q4 2018.

Full disclosure. This is my personal copy of the copy of the game. I have no connection with game designer Ignacy Trzewiczek or Portal Games. I am a Patreon supporter of We're Not Wizards and Gaming Rules!