on November 30, 2021
This review is based on the final retail version of the game provided to us by the designer and publisher. We were not paid for this review. We give a general overview of the gameplay and so not all of the mechanical aspects of the game may be mentioned. This review is SPOILER FREE 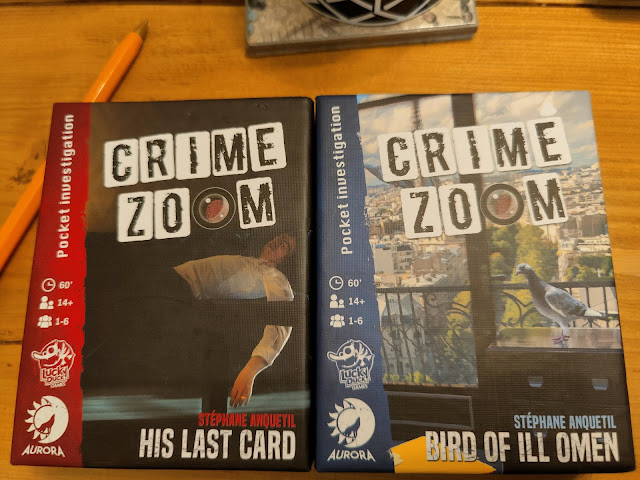 Like an evenings entertainment in front of your favourite streaming channel, where you've decided to hit on the the 'Play me Something' button and you're not sure of what the next hour or two is going to unfold. You know the theme is MURDER but you have no iota of a clue as how how things will play out as you pick up the deck of cards and lay out the first nine in a three by three grid, forming a picture of a scene. On the screen this scene would be busy with forensics and police milling about, looking for items to investigate. On the table in front of you, this is almost a snap shot. A point frozen in time where you can see a tragedy unfold in front of you. You need to make the decision where in the picture you are looking to zoom into and which card is going to be deftly picked up, turned over, and voice it's choices to us.
Crime Zoom is like a chose your own adventure in card form, and you can see why Lucky Duck Games have partnered with Aurora to bring it to us. It's not a million miles away from their Chronicles of Crime range of games, but without the need for the app. Everything is contained with the deck for you to investigate, and just like those wonderful flicky books, every card is there to give you some kind of choice. The choice of where you go will be entirely up to you as the game progresses. Gameplay is very straightforward. If you want to look at the recently deceased in the scene more closely? Then turn over the card and follow the instructions on the other side. It will normally give you instructions to pull another card from the deck to find out more information, or sometimes even give you two or three cards to create another place for you to visit. New places mean more cards to investigate and potential suspects to interrogate, and its not long before you can end up with an entire table full of tiny scenes all connected and all requiring you to piece the case together.
When you have made your final decision on who the culprit was then you can finally check the back of the rulebook that will have several questions in order to help you work out your final score. The less places you visit and the more cards you have left to play will give you the higher score at the end of the game. The risk is that in trying to finish the game as quickly as possible, you might fall foul of the twists and turn of the story and chose the wrong suspect altogether. Those who are more cautious will no doubt have complete confidence in their choice but are likely to have less cards remaining and therefore score a whole lot less.
There's nothing here to stop you from completing a couple of scenarios in an evening. Crime Zoom has enough going on to keep you busy for an hour with ease, and larger groups with more discussions will extend that time, but those just wanting to be the grizzled loner detective will still be able to take part. Crime Zoom isn't going to be effected by the number of players directly and will suit a quiet evening as well as an after dinner group game. Both His Last Card and Bird of Ill Omen are neat self contained stories with enough surprises to keep you guessing. Due to the restrictions placed on the game from the card medium, the writing has to be concise but very tight in terms of it's story telling and this is something that Crime Zoom does very well. The art is both practical and stylish and doesn't intrude unnecessarily on the gameplay. There's some clever little puzzles in here, and sometimes it is best to stop and think, gathering your evidence than to rush in and guess here, there and everywhere.
Just like the Unlock series of games, once you understand and solve the puzzle, there's little to go back for after the event, unless you are looking to beat the game at its base mechanical level and try to unmask the criminal in as few moves as possible. It's like viewing a movie for the second time. The main surprises are probably going to be spoiled, but you'll probably be more aware of the subtle details which are giving the game away. You can easily reset the game by putting it back into numerical order, but I'm not convinced you would play the game again with the same group of people unless you were determined to beat your previous score.
So for those who are looking for something similar in the Chronicles of Crime type of vein then this is going to scratch that small would be detective itch. The story elements in both games are strong, but it doesn't rely on illogical narrative stretches in order to keep you guessing the way forward. This won't go the distance in terms of multiple plays but under the current circumstances in terms of social get togethers it's going to fit the bill quite nicely.
Bird of Ill Omen
Author - Stephanie Anquetil
Illustrator - Goliat Gashi
Graphic Designer - Christopher Matt
Proofreading - Kudos, Bree Goldman
His Last Card
Author - Stephanie Anquetil
Illustrator - Julien Long, Cecilart
Graphic Design - Christopher Matt, Sandra Tessieres
Proofreading - Kudos.
You can find out more about the games by visiting https://luckyduckgames.com/games/189-crime-zoom-his-last-card
If you would like to support more written pieces on the blog then please consider backing us on Patreon. www.patreon.com/werenotwizards
Aurora Games Bird of Ill Omen Crime Zoom His Last Card Lucky Duck Games