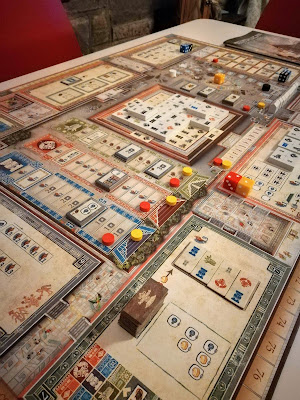 Where do I start with Teotihuacan: City of Gods? Getting it on the table it looks equal parts complex and beautiful. Essentially a Euro, with elements of set collection, some tile laying and board which is a giant rondel the game offers a myriad of strategies to pursue in your bid to outscore your opponents.

The game is based on the Aztec city of the same name (pronounced Tee-oh-tay-wah-Kan, I am reliably informed by a Mexican colleague), and in it players take on the role of families vying for favour by helping to build the pyramid in the city, whilst worshipping at various temples to gain the favour of the gods. The board itself has a scoring track on the outer edge, with the rondel inside that comprising 8 different areas where players can take actions. Moving in towards the centre there are also the three temple tracks, the Avenue of the Dead and the eclipse track, before slap bang in the centre is the pyramid.

The ultimate aim of the game is to outscore your opponents. There are multiple ways in which to achieve this and I'll do my best to give a flavour of them here. Setup is determined based on player count. Where players start on the board, starting resources and turn order are all decided at this stage. If the player count is less than the maximum of four then where the dummy player(s) are placed on the board is also determined at this stage. These positions will change but we'll get to that shortly.

A player turn is either move a worker (you start with three) and take an action, or unlock worshipping workers (we'll get to that soon). Players can move in a clockwise direction on the board, going 1-3 buildings on a turn and either take an action on that building, or collect cocoa. Cocoa is the main resource in the game and management of it is vital to maximise your options and scoring potential. 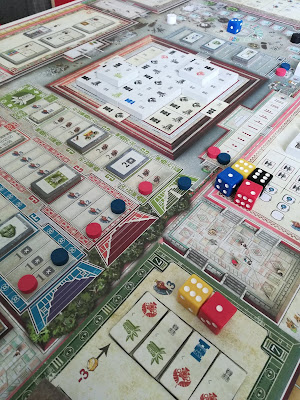 The game is played over three eras with each ending on an eclipse. These are measured by a black and white disc. At the end of the last players turn the white disc moves one step towards the black with the eclipse occurring when they meet, unsurprisingly. Since this is a game with a lot of options, this of course isn't the only way to advance the white marker as we'll see when we get to ascension later on.

Three of the buildings on the board are places you can gather resources (in this game wood, stone or gold). Resources can then be spent elsewhere. For example wood and stone can be used to build on the pyramid and gold can be used to buy technology. There are also building related to the construction of the pyramid. You can build on the pyramid, scoring points for matching symbols and for the level you build on or you can go to the decoration building and adorn the pyramid, again scoring points for matching symbols. Each of these actions lets you move along the pyramid track, another area to score points. 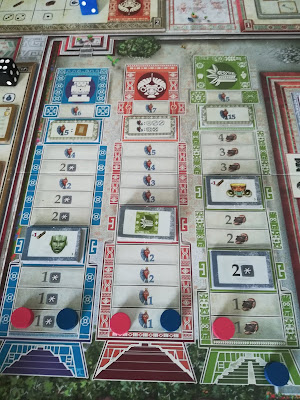 There is a cocoa cost to these actions as well though. When a worker moves into a building, if other workers are already present then the player taking the action must pay the cost in cocoa equal to the number of unique colours already present. If a player doesn't wish to take the action they can collect cocoa instead. Like the cost to take the action, the amount they get is equal to the number of unique colours +1. As I mentioned before, cocoa is very important n this game. At the end of each era you have to pay for your workers. Workers level 1-3 cost 1 cocoa, level 4 and 5 workers cost two. Any cocoa that can't be paid results in points lost.

Several buildings have a sliding scale of reward, depending on how many of your workers are present and what level they are (or what number is showing on the D6). When completing the action, one or more workers can then be "powered" up. If the action allows you to power two workers, this can be the same worker twice if you have two or more present. What's the point of this you ask? Well, this is important for two reasons. Firstly, when a worker reaches level 6 it ascends and is reborn anew. Effectively you place the die/worker into the Palace space at level 1 and take a bonus which can be unlocking your fourth worker, scoring points, gaining cocoa etc. Another important result of ascension is the eclipse marker moves one step closer to the end of the era and potentially the end of the game if it's already the third and final era.

Players can also set their workers to worship in certain buildings. Doing so allows the player to advance on the corresponding temple track with lots of bonuses and points on offer for doing so. At a cost, the worker can take a second action in the worship space and gain a bonus tile that can be used during any of their turns. These offer all manner of in-game bonuses that offer another decision point on how to maximise their benefit.

A quick word about Solo mode 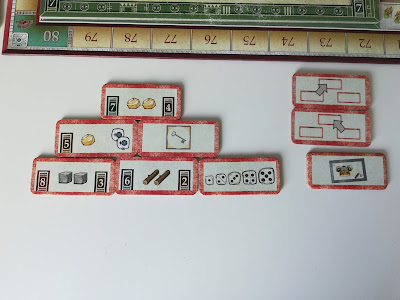 I can't talk about the game without mentioning the solo play. In a word - fantastic. Dávid Turczi of Anachrony (and many others) fame was brought in to develop the solo mode and he's knocked it out the park. Setup for Solo mode sees two phantom players occupying buildings around the board. Three workers are placed on the board with the buildings they are placed in drawn at random. The remaining two workers are used to roll on "Teotibot's" turn. Depending on the resulting roll, the actions the bot takes are based on a set of tiles which are laid out in the shape of a small pyramid. Each tile different possible actions. The bot may carry out the action on a building, game resources or gain cocoa. If the bot has 10 cocoa at the end of its turn is scores points. It's a really ingenious way or operating the bot. When the action is taken the tile is removed and the tiles shuffled (two tiles determine the way these tiles are shuffled, before they themselves are shuffled - see photo). There are a few specific rules on scoring in the solo game but it offers a pretty solid challenge. 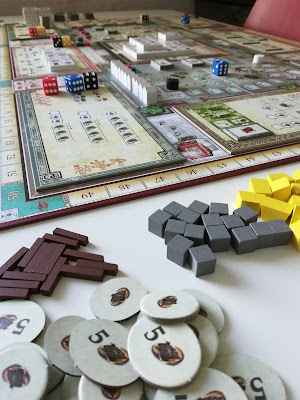 There are a lot of options in this game. After about 5 plays, some solo, I'm no closer to finding a single strategy that will  guarantee success and a steady stream of points. This I think is one of the strengths of the game. There's a lot of replayability and the movement round the board can result in crowds of workers occupying buildings, which really hurts players economy and abilities to carry out the buildings actions. Without these actions, points will be harder to come by. There is the option to collect cocoa but then that slows down your attempt to collect points.

I've only touched on some of the buildings available in the game too. There are other buildings which help your progress on the Avenue of the Dead for example. There's just so many possibilities it's amazing!

The game is fantastic to look at, component quality is good, it's a great game with 4 and also solo. In short I love it. There's tons of ways to advance your score in the game, and while one avenue to score gets closed off, another one will open up. Do yourself a favour and get a game of this to see if it's for you. Oh, by the way...there's an expansion coming.