on March 01, 2022
This review is based on the final retail version of the game provided to us by the designer and publisher. We were not paid for this review. We give a general overview of the gameplay and so not all of the mechanical aspects of the game may be mentioned. 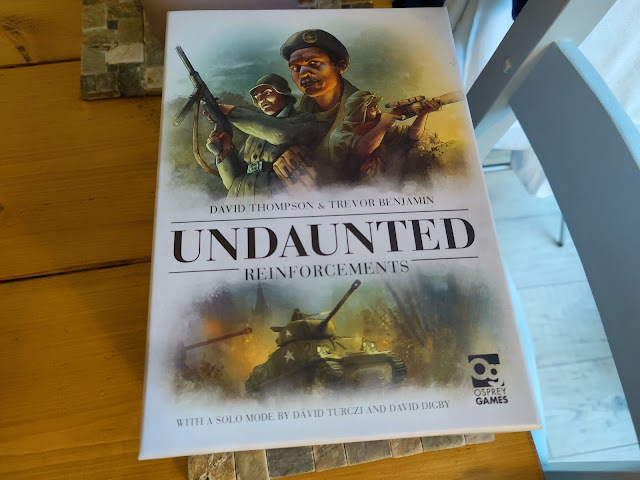 World War II as a theme is a tired, outdated and in some cases potentially dull affair. I have no idea why people would want to replicate and cash in on a conflict that killed millions and almost brought the free world to its knees. You can bang that drum repeatedly about the glorification of World War II. But with recent events in the world including the frightening rise of ring wing ideology, Nazis literally marching again in the US, you also can't help but feel that this drum needs to be there in the background reminding us about the past. Because there are now young people who don't know what the holocaust was, or how serious it was and why maybe getting people playing a card based game which makes them start to ask questions about history is maybe a good thing.

I'll be honest, I knew very little about the existence of the British Long Range Desert Group before I unwrapped Undaunted North Africa even though I believe I had family who fought there during the War. It was generally something that was mentioned but was never really spoke about. People who spent their time trying to kill strangers under extreme circumstances probably aren't likely to want to sit there and regale their tales to their grandchildren, even if they ended up bringing one of 'the enemy' home and marrying them. While I knew that I had a Major General in my family, it was a duty that you carried out at the time as well as the guilt and horror, as often the victors don't just carry the spoils but are spoiled in the process. 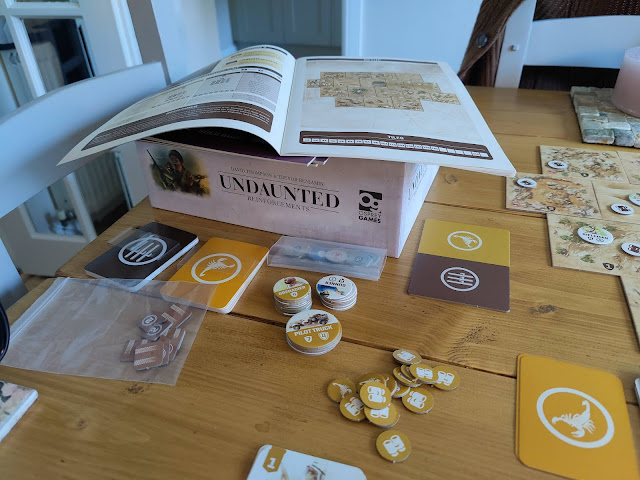 Undaunted is fairly kind of simple deck-builder, using the units you've been given in a small hand to carry out various actions, in order to claim, clear and in some cases destroy objectives that are given to you through a series of scenarios. It's not as complicated as say Imperium in terms of what it needs you to do, and a playthrough with the rulebook is probably enough to see you through your first couple of games. Gentle reminders of the actions will probably have you going back after that, as there is a lot that the different units can do. In the beginning you'll be wanting to bolster you hand from your supply in order to increase the potential of available actions that you have and at the same time you'll be wanting to avoid the fog of war cards, that will fill your hand with rubbish and minimise the actions you can take. Where things start to get different is that you'll be selecting a different set of cards based on the scenario that you select. 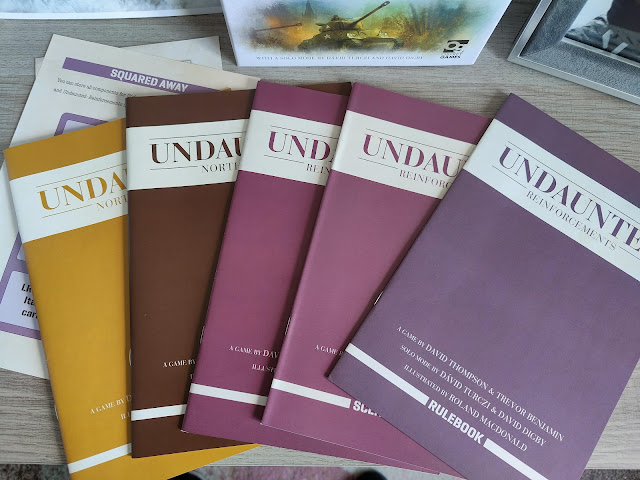 It's closer to a Clank type deck building affair than a Star Realms situation, as the actions of the cards are carried out on an ever changeable tile board set up based on the scenario you'll be playing. So your theatre of war will play out in front of you and the units you're moving will physically move on the board, and it leads to almost being kind of skirmish like, as you hope to get the cards you need to move or take actions for that particular unit. You might just decide to take a pot shot at the enemy instead, in which you take into account ranges and cover and then roll a dice to decide if you've inflicted damage, and as with the case of anything random, sometimes the dice will have you acting like a crack shot and other times you'll be in a crap shoot instead. I'm surprised that cards aren't used for battle strength instead of the dice as they are already used to decide initiative. It's an unnecessary randomness that you could argue is necessary to show how quickly the advantages can turn when both sides are so evenly matched. What Undaunted does well is to avoid falling into the normal deck builder trap of having cards that will guarantee you to take an easy advantage over the opposition. This is why I'm more reminded of a skirmish game than a deck builder. 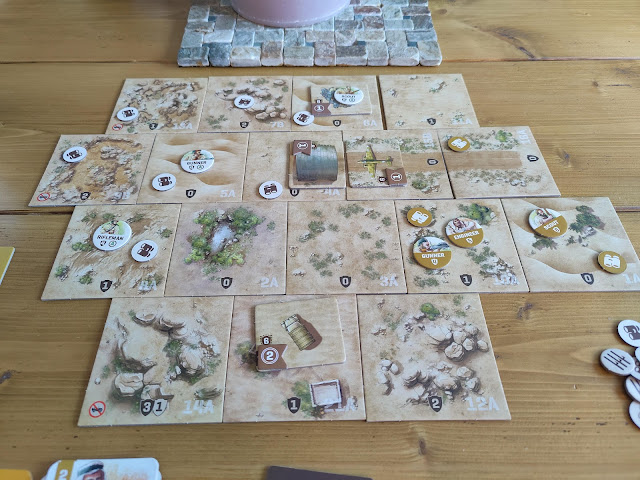 Reinforcements collects everything you know from Normandy and North Africa into one huge delicious box of Undaunted but also includes some additional units that you can play, as well as bringing in some of the rules from North Africa into Normandy retrospectively, which gives you yet another reason to break out the previous games if you haven't been already. One of the biggest inclusions in Reinforcements is the ability to be able to play solo. Now, this can't be understated enough, but the sheer amount of work that has gone into the solo rules is frankly staggering. When you dive into solo rules, you're normally faced with a couple of sweeping generalisations that are meant to cover as many of the possibilities as you can. Being honest? There's a pile of solo modes out there that use this method and they just make you pine for someone opposite the table to play with. In fact, often you're sometimes better just to double hand a game and play good cop / bad cop with yourself. 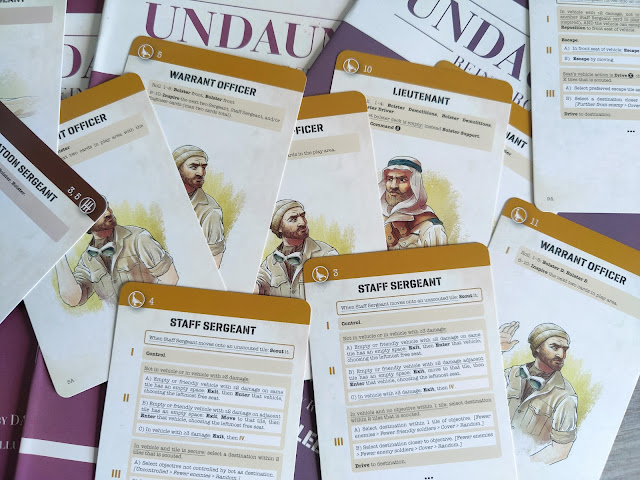 Reinforcements is like someone sat down (David Turczi) and pretty much had a word with himself (David Turczi) and decided to probably not do anything else for a couple of months. Undaunted simply wouldn't work with generalisations because each scenario is different from the next. You can't have a bot unit going on the offensive when the idea is to capture an objective. So instead what you get is individual cards to help decide the unit's potential actions instead in a given situation. For the majority of the time it works well. It's a given that you're sometimes having to refer across a couple of different rule books to check and make sure you are actually doing what the bots correctly. Sometimes you'll be stuck making a logical decision as that cards will never be able to predict every potential outcome. When you consider that the easy route wasn't taken here and how it could have be instead it makes you feel like I should be more generous in how critical I should be of the Undaunted series. 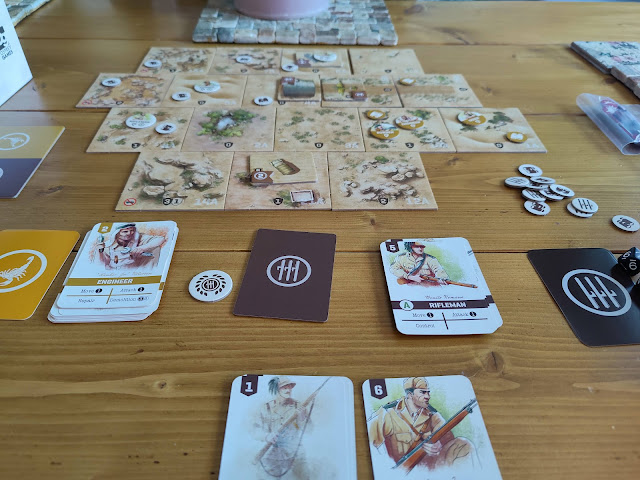 Undaunted is self aware of it's relative simplicity in its base mechanics and what it brings to the table. The collection of scenarios and campaigns that it offers alongside the solo mode will mean that this is going to offer a lot of gaming time for those who want to dive back into the subject matter of WWII. For those who are fans of the Undaunted series, then this could be seen as a must have to not only complete but compliment what you have already. For those looking at the deck building genre for the first time and are wanting more than cards but less than skirmish, then Undaunted Reinforcements will suit. It's not going to drown you in technicalities and a complicated meta that only the long term players will understand. It possibly might make you think and want to learn more about the events the games are based on. At the moment, I can't see that being a bad thing at all.

You can find out more about Undaunted: Reinforcements by visiting https://ospreypublishing.com/undaunted-reinforcements